I was recently working with a team that was billed as a “learning team” so all new engineers spent time on this team before moving on to project teams. The team as it stood had five members that had been working together for a few weeks. In our retrospective we focused our conversation around the fact that the next Monday we would be getting FIVE new team members and doubling the size of the team. During the retro it came up that it may take a while to learn who was strong in what areas and how could we accelerate that learning…so we created a Shi-Ha-Ri Web activity for their first day (See Picture). For this activity we listed a variety of skills and languages on the board and asked everyone to place at lease two items in Shu (meaning they were an apprentice in this area), two items in Ha (meaning they were a journeyman in this area), and two items in Ri (meaning they were a master in this area). As people posted their skills into the circle (it looked like a bullseye initially) we started to create lines connecting someone who was a Shu in Docker with someone who was a Ri in Docker. What we ended up with was lines by skills that allowed us to set up dev pairs for the few weeks where everyone had the opportunity to be both Master AND Apprentice. All in all it was a fun activity to get everyone talking and sharing their backgrounds and provided a quick start for a team that was apprehensive about growing so quickly. Thought I’d share it here and see if anyone has done anything like this before or has any other tools for sharing team skills? 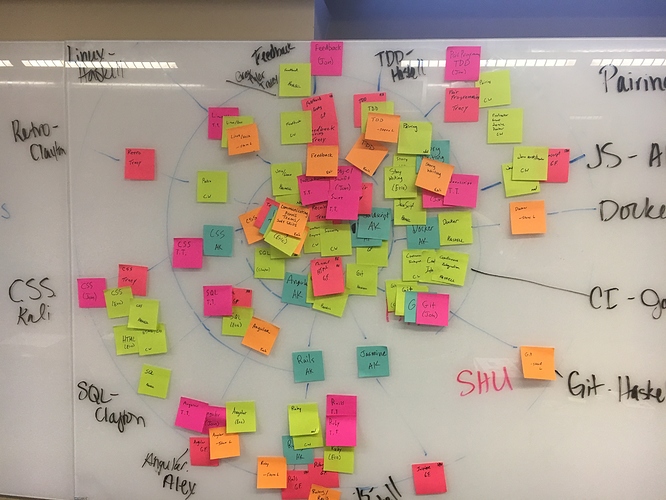 @Colleen I love this idea… In past we tried create an incrimental sprial modle dashboard to show teams skill progress in line with the skills and tools involded in building a product. I like this much better than that. I am also a radar chart junkie !

I do like use the progression of
Apperntice
Journey Man
Craftsman